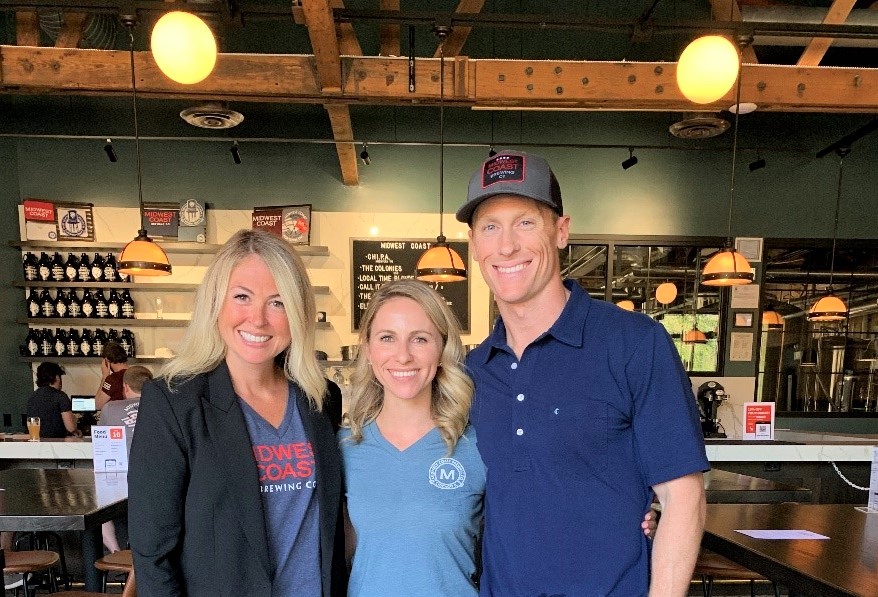 National Beer Day is April 7, 2020. Celebrate by purchasing Midwest Coast swag or beer-to-go: 2k2go.com/midwestcoast. If you’re not local to Chicago, you can still help during the COVID-19 shut down by donating to the staff fund at the link above.

I brewed my first batch of beer with my roommate in our San Jose, CA, apartment in June 2010. It was a ‘drinkable’ Irish Red Ale. I soon fell in love with the smell of mashing grain in hot water and the whole process of brewing. From that moment on, I was hooked and always knew a brewery would be a “someday” type of thing. In early 2017, I was looking to make a job change. My then girlfriend (now wife) Suzie and sister (still sister) Lanie (both pictured above) really pushed for “hey why not the brewery!” It didn’t take much pushing.

I first heard “Midwest Coast” as a term referring to the Great Lakes region from a friend and lifelong Chicagoan. He was defending the Midwest from some coastal elitists. A few years later, I was doing a test recipe at home for a New England IPA. I only had half the amount of New England hops I needed in the freezer, so I had to supplement with West Coast IPA hops – half East Coast hops, half West Coast hops. The name Midwest Coast jumped back into my brain.

The mascot is our family dog, Maverick, Lanie and I had growing up. He was an idiot, but he was our idiot. He loved life, and our mom used to always say Mav “never had a bad day.” Our logo captures that well.

Easy…the wooden bowtruss ceilings. We looked at dozens of other places and neighborhoods in Chicago. The pictures of this place looked nice, but it was too big of a space. However, once we walked in, it was obvious. You really don’t see bowtruss ceilings like that anymore, and they were in excellent condition. The building itself is nearly 100 years old, and there were so many great features for us to showcase.

My sister Lanie really knows what she’s doing with design and believes every little detail matters. She picked out almost every feature from the end tables being tucked in the corner to the legs on the footrail of the bar. All things that would (and did) go right over my head. Our customers notice though and routinely compliment the space. The taproom does a great job bringing out the beauty of a nearly 100-year-old building with some nice modern touches. Lanie is to thank for that.

Elevator is one of my favorites as well! It’s a New England IPA meaning it has a ton of haze and juicy hop character without the bitterness of a West Coast IPA. The name came from ARCO’s own Michael Rossing who was the Project Manager of the buildout.

I won’t get into the details of why we have an elevator with no accessible second floor, but Michael called me one day right around the time we opened in Summer 2019 and said, “Hey I heard you were looking for a beer name? I got one for you…Elevator to Nowhere.” I was sold. It’s a great name, and like all great beer names, it has a great backstory.

My wife Suzie does a great job making the taproom known for two primary things: being dog friendly and family friendly. A lot of breweries go for more of a dark, skull-and-crossbones, heavy metal type vibe. We think that’s great!  But, it’s just not us. We’re big dog people and are at an age where a lot of our friends are starting families. We want to make sure those groups in particular feel like they have a place in the craft beer community.

Be patient. You as the client and ARCO/Murray as the general contractor will move at one pace, but the permitting authorities may move at a very different pace. Just be patient, keep with it, and try to stay sane.

To experience a better way to build, contact us: 331.251.2726 or partnerwitharco@arcomurray.com.

ARCO/Murray Commences Construction on The Terminal -Revitalizing 250,000 SF of Former Industrial Space on Chicago’s West Side

Resetting TI Cost Expectations for Your Next Office Buildout